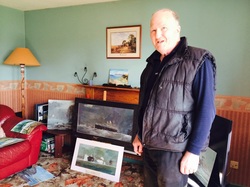 Since the age of twelve Ray O'Donnell has been interested in art. At that time, from copying photographs, he began learning about perspective. Later, through meeting a professional artist, he learnt more about colours and how to mix and use them. Two attempts to enter art college however failed but this was probably down to his main ambition which was to go to sea.
From a very early age Ray always had a passion for ships and steam trains, and having made up his mind to go to sea, he set out on this with the result that when he left school at nineteen he joined the Royal Navy.

After a very un-illustrious but exciting and interesting time at sea, and achieving his goal in particular under the white ensign, he decided after many experiences of his fourteen years in the navy to return to the art. So Ray went back to college in Southampton to do a course in design and illustration and on completion of that course he went on to gain a Higher National Diploma in Design and Illustration.

His original intention was to work in a studio situation but instead he decided to work from home and, whilst not exhibiting, undertook numerous commissions on a range of subjects as well as his two passions, ships and steam trains.
View Ray's paintings on the Gallery page.